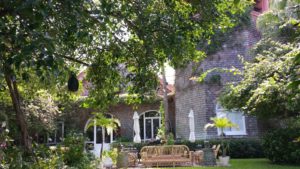 If you are looking for a breather from the maddening crowd, then Lake Trail in Palm Beach might be such destination. For almost six miles, the well-paved trail allows for traffic- free bicycling or walking. The true draw, however, is to the opportunity to peak into the playground of the elite who modeled their homes on the palaces of Europe. You may not spy them having parties or doing much of anything, but the opportunity to be in their vicinity is thrilling. The voyeuristic concept came from Henry Flagler, a railroad magnate/hotelier who essentially put Florida on high society’s map. He wanted a designated area where his hotel guests could enjoy the water while people watching. Given that the millionaires in the neighborhood could have fought to have their backyards extended to the sea but did not testifies to Flagler’s power. Homeowners counteracted the move by planting towering hedges to protect their privacy. However, over a hundred years later, the conceptualization of a tree lined promenade is still popular with the residents and visiting tourists seeking their own escape. Runners, skaters (both roller and blade), bicyclists and walkers all enjoy the trail. Views offered include the Intercoastal Waterway and luxurious Palm Beach estates.

History
Henry Flagler envisioned Palm Beach Island as the playground of the rich and famous. He opened two resorts that were destinations on his railway line starting in 1902. Snowbirds of the Gilded Age sought to escape the cold without wanting to give up their luxurious lifestyles. What they found was balmy weather and the opportunity to display their wealth (most were noveau riche). Many sought to cement their newfound statuses with their large estates and to establish their family name in high society. Flagler made the barrier island Florida’s Riviera of sorts. The rich and famous who wanted to remain stateside sought refuge from the cold and basked in the Florida sunshine. Soon the island grew so renowned that the Kennedys, America’s unofficial royal family, had one of their compounds on the island. During this time, an American family would not be considered of high status unless they spent at least some part of the year in residence on the Island.

Biking
If you are just on a day trip or your hotel does not provide bike rentals, you can still enjoy the trail. Palm Beach Bike Shop (palmbeachbicylce.com) offers bikes for rent starting at USD 15/hour. It might be a good idea to rent for at least two hours to really enjoy the views without the confines of time. There is a speed limit on the trail of 10 mph, but no restrooms. Knocking on the door of the elite will not go over well so plan ahead.

Lake Trail offers stunning views and a sense of paradise just as Henry Flagler envisioned. Rent a bike and enjoy the trail with million dollar views just for you. There are eateries along the path if you want to have a leisurely lunch or sip on lemonade to beat the heat. Plan your trip today!

Please print & fill out our medical history forms before your visit to save time!